RESURRECTION GATE: About the Game

Welcome to the first public devlog for Resurrection Gate!

The aim of this post will be to offer more information about the game's premise and contributors, as well as a more in-depth look at a few of the gameplay elements described on the main page.

Resurrection Gate is an interactive gothic novella about loss, liches, and what lingers at the edge of existence. It is currently in-progress and is being developed in Twine ®.

… and other such tribulations.

Gameplay is choice-based, revolving around dialogue and actions that govern specific variables. Resurrection Gate has multiple protagonists and its full story will unfold through three different points of view. Every character has been shaped by their past, whether they are in the prime of their life or have lived undead for years. What the future holds for them remains to be seen — but in the present, their fates are all connected.

Resurrection Gate is set in a gothic-fantasy world where death is not always an ending. The human and not-so-human denizens of Wratun are coping with political and personal upheaval after the former Duke's demise. His replacement is a royally-legitimized usurper who intends to reverse at least some of the damage his predecessor did to both the citadel and the citizens, but such a task is easier said than done.

Despite its wavering stability, Wratun remains a bustling territory, and all manner of people come and go in the course of their travels.  Among Wratun's visitors are a young outcast monk who comes to the Citadel to seek out a priest who once lived at their monastery, and two displaced retainers of an annihilated citadel who are seeking refuge and a place to start anew.

In Resurrection Gate, death can open doors, but perhaps some are best left closed.

👁️ @Grimoirtua : I'm Grim, aka G.C. Baccaris, and I'm the game's writer and developer. In addition to writing and narrative design, I program and handle the front-end development (CSS, HTML, JS) of this game, as well as the general programming and assembly of all its components into a functional whole.

👁️ @Ruuneverse : Ruune is working on an incredible full OST for Resurrection Gate. The game's music is inspired in part by the soundscapes of Bloodborne, Phantasy Star, Berserk, and Lost Eden, and we're working together to develop a unique original sound that includes character themes, intriguing ambiance, and mood pieces.

👁️ Special Thanks : Joshua Grams' JavaScript expertise has been a massive help! Additional thanks to all of my patrons, without whose support this game's development wouldn't be possible, and whose support allows me to collaborate with and be able to pay fellow indie creators for their incredible work.

Several features are listed on the main page, but I want to zoom in on a few of the most essential for the time being:

👁️ Multiple Playable Characters : There are three playable characters with distinct backgrounds and personalities whose POVs cycle throughout the game. Each character has different strengths and weaknesses, some of which can be emphasized or de-emphasized by the player. Their talents and vulnerabilities govern how they’ll behave within their own POV scenes, as well as how they'll act when they appear as NPCs from other characters' points of view.

Different POV characters also have affinities for different NPCs. Romance is not a mainstay of the story, but certain characters do share bonds with others which can be deepened during the course of the narrative. Some bonds are strictly platonic, some verge on romantic, and some can develop one way or the other.

👁️ Robust State-Tracking : A character's status, governed by both player choice and narrative events, will affect the choices, dialogue, and actions available to them. A character's status can affect not only their mood, but their well-being, both of which may alter their behavior. For instance, an injured character cannot perform certain actions, and a character lacking peace of mind may be unwilling to engage in others.

The game will also track certain decisions and dialogue choices made by each character. The player characters' relationships with each other and with NPCs may be influenced by their actions both in and out of dialogue.

As an example, character may become distrusted by others for acting disrespectfully or erratically; if it becomes severe enough, a status like this can't be resolved. Characters can also succumb to fear and injury, and different characters will have different approaches to managing and alleviating stress or pain.

👁️ Text Mechanics : As an interactive novella, this game is prose-heavy, but to avoid loading in large, dense blocks of text all at once, the player is put in control of how it's displayed. Rather than waiting for timed text-reveals which would disrupt the player's experience, the player will advance the text by pressing Space or Enter*. When  you've finished reading a paragraph, a small icon at the end of the line will indicate that more text will continue on the same passage. This feature lets you control the game's pacing, making it easier to read and engage with.

The game is written in third-person present tense in order to emphasize each character's experiences as distinct from one another. Every character being primarily referred to as "you" or "I" could get confusing quickly otherwise.

*Although the player can also click anywhere to advance the text if preferred, this function is preserved for mobile compatibility, and will enable mobile players to tap the screen to reveal text.

👁️ Played in-browser : As a web-based game, Resurrection Gate will be playable on any device with an internet browser, though it will be optimized for Firefox and Chrome. It will not require an internet connection to play, as all of its assets will be self-contained offline; the playable game is simply a file that opens in your browser of choice. 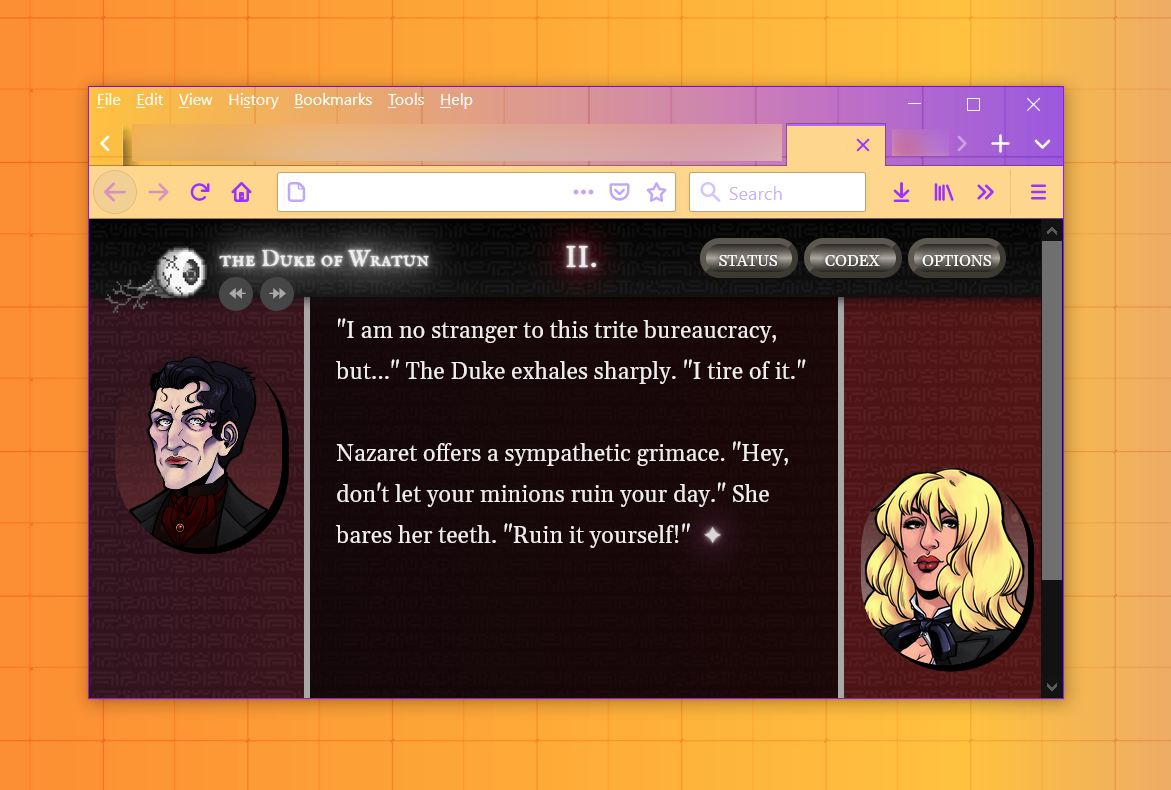 Because this game is currently in development, more features and gameplay details will be discussed in future devlogs.

I’ve been exploring this setting over three previous games. Each one was made for a different game jam as a brief, experimental proof-of-concept technical demo, but over time, the themes, characters, and mechanics of those games have shaped Resurrection Gate. There’s no requirement to play any those games in order to understand this story, but you may recognize earlier concepts of certain characters if you do.

Collection: "And some part of me is mortal yet..."

Although its story will examine certain elements of the other games that may be familiar to those who have played them, Resurrection Gate will be a standalone game.

You can follow here on itch or on Twitter to keep up with the development process! You can also consider pledging $3 on Patreon for exclusive access to behind-the-scenes details and monthly, more informal devlogs, if that appeals to you. Patreon devlogs have included Resurrection Gate material since before its official announcement, and will continue to function as a more casual space for me to post month-to-month, early-access updates and reflections on both RG and whatever other projects I'm working on in a given month. Patrons also have early access to all of my Twine tutorials.

In contrast with Patreon, devlogs on itch will focus solely on Resurrection Gate; these will be less informal and more cohesive and specific, blending together more polished elements from several months' worth of Patreon devlogs while also featuring new updates and more organized information about the game itself. I'll be aiming to post a new devlog here every 2 months or so!

Resurrection Gate is currently in development. Although I have the pleasure of collaborating with other creators when it comes to certain assets, the writing, programming, narrative design, and “assembly” of the game is up to me, and I'm working on RG while also freelancing. Completing this game will take time, and I’m currently shooting for release by Summer 2022.

The next public devlog will contain a lot more new info! It'll introduce the game's playable characters, with a more detailed look at their portraits, motivations, associated UI, and a few other details about how each character's point of view may affect gameplay.