This devlog is a quick introduction to the playable characters of Resurrection Gate. A vibe overview, if you will.

Each character has a distinct background and personality which will inform how they behave — and how the other PCs may react to them when encountered as NPCs. During the course of the game, you'll make decisions and perhaps mistakes for each of these three characters. Initially, the point-of-view will cycle between Yasha and Sully, but after a certain point later in the narrative, the Duke will become the primary POV character.

Each character's POV is represented by shifts in UI color and by a different mirror graphic in the upper-left corner of the screen. I'll also be talking about the design of these elements in this post. I create the game's UI using CSS and HTML, Rowan Oats is responsible for the charismatic character portraits, and all of the mirrors in Resurrection Gate are designed and illustrated by Meagan Trott!

A soldier in search of peace 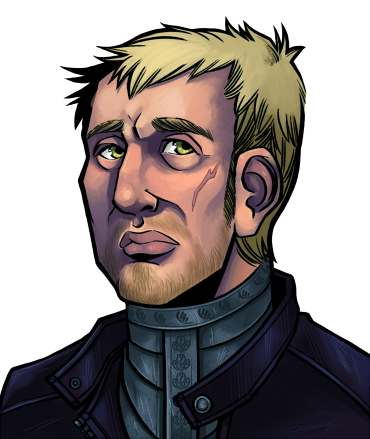 Today, Yasha is a scavenging mercenary whose only ambition is to ensure that his small group survives from day to day. What feels like a lifetime ago, he was Lieutenant Holst, a cavalry officer who served the Marquis of Abynor. Now the Marquis, and Abynor with him, are no more — but all of his former servants still bear his sigil writ upon their flesh. Yasha is no exception.

Yasha is one of the few survivors of a catastrophic siege, and he still struggles to parse the grief and guilt he feels in the wake of such violence. Unmoored from their former home, he and his companions must find somewhere else to settle before their luck runs out. Seeking asylum, they head for Wratun.

Gruff and hypervigilant, Yasha struggles with his own self-worth, but cares deeply about looking after others. He can be harsh and self-deprecating, yet despite his outward prickliness, a spark of hope may yet kindle somewhere within him. 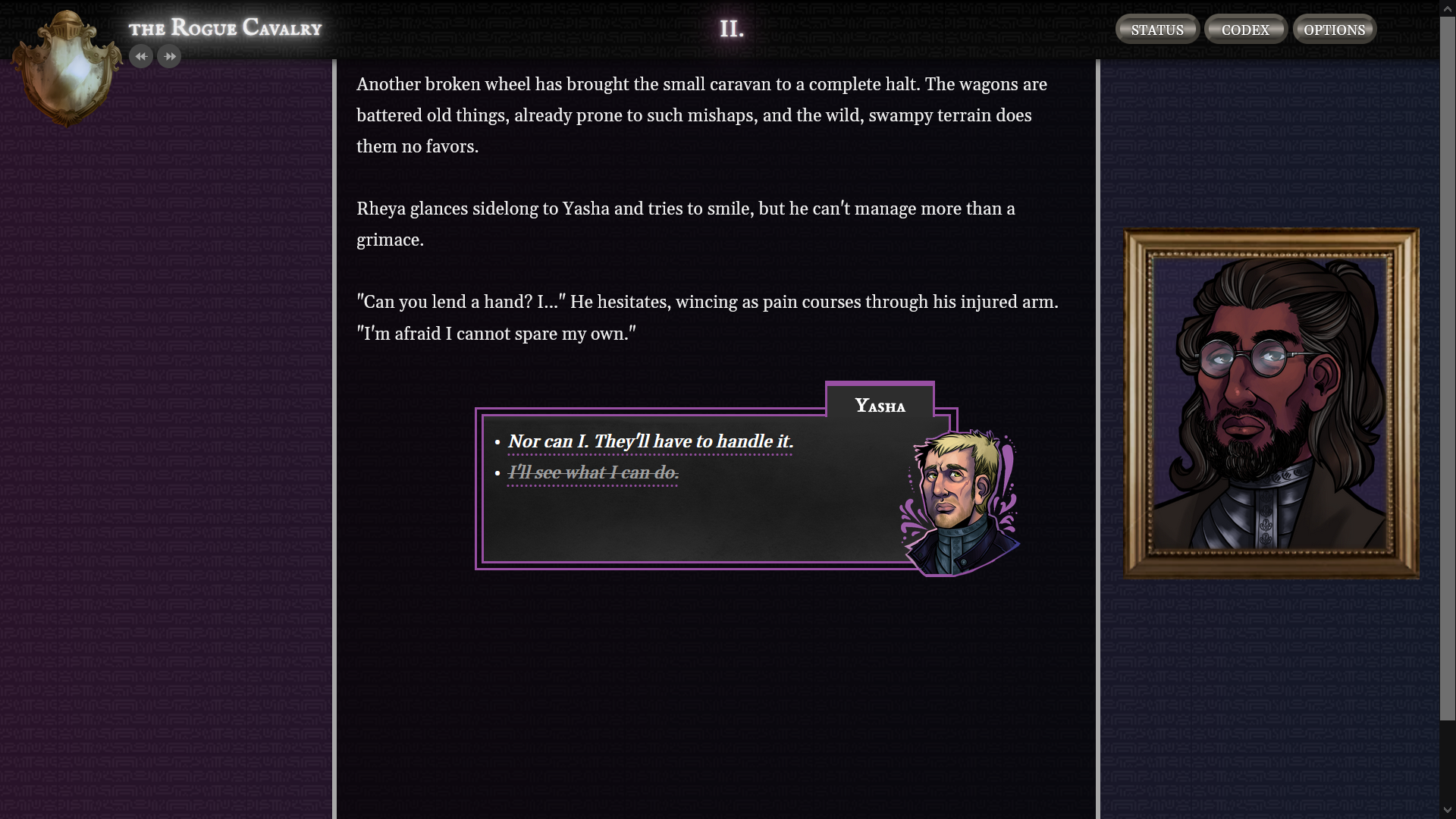 The cavalry UI has a two-toned color scheme, symbolizing both Yasha and the influence of his dearest companion and former colleague Rheya in a magenta-indigo gradient.

Yasha's mirror is based on medieval European plate armor. Despite its significant wear and tarnish, there is still a streak of clarity across the glass. 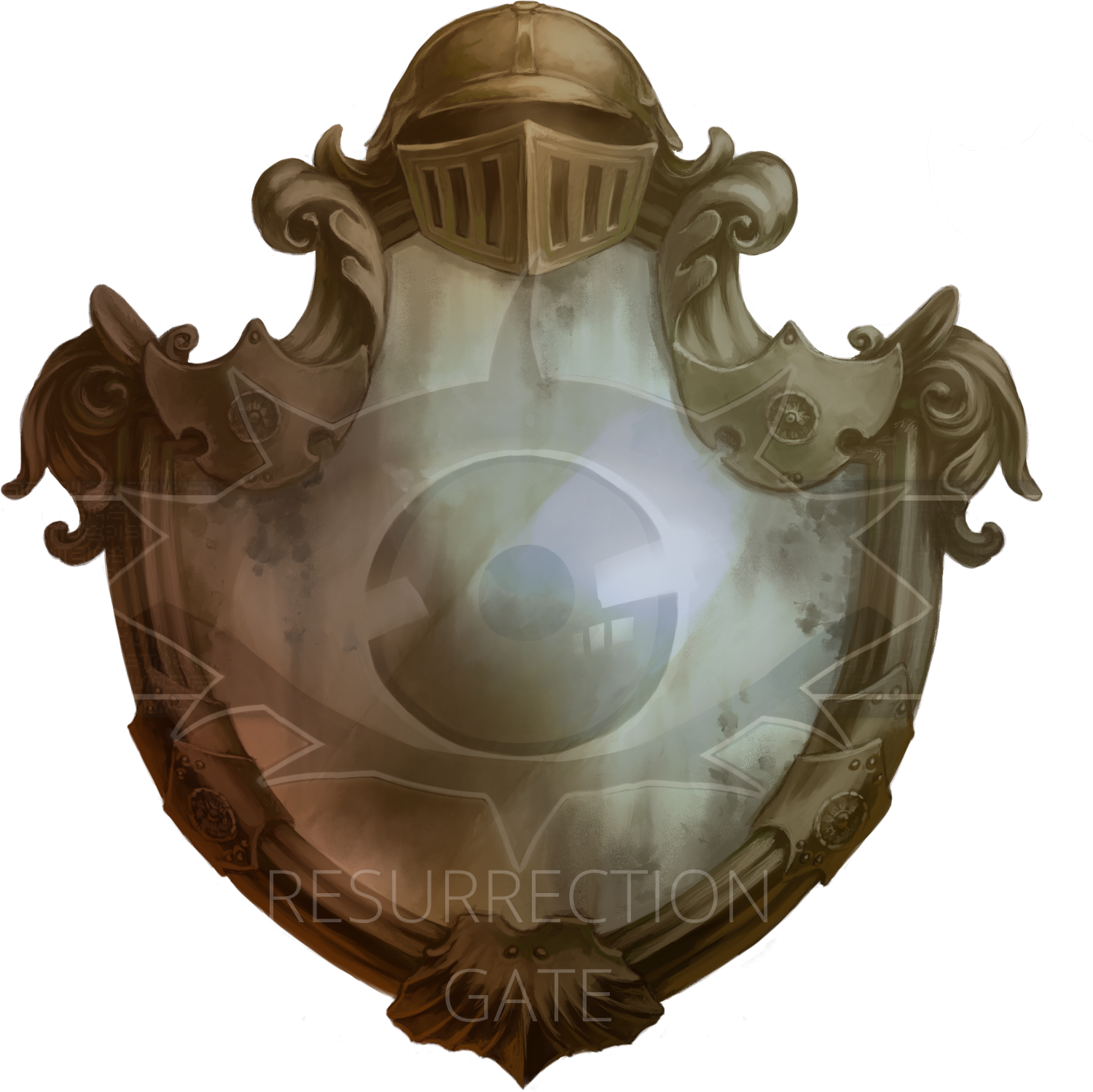 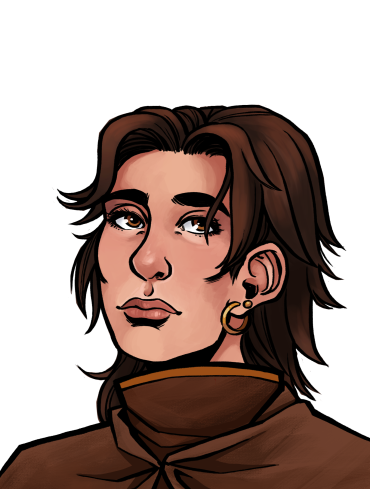 Judged a poor fit for monastic life, Sully is embarking on their adult life elsewhere, cut adrift to experience their first taste of true independence. Uncertain of where to begin, they head for Wratun, where a monk who once lived at their monastery now serves the Duke.

Sully is  gregarious and clever, but also precocious, brash, and irreverent. They are the most emotionally mellow of the protagonists, for life has not stricken them with the same traumas — but they are perhaps too bold for their own good, lacking some of the self-preservation instincts of their more world-weary counterparts.

They yearn for somewhere to belong, but are growing weary of rejection — and part of them is very comfortable remaining somewhat of an outsider. 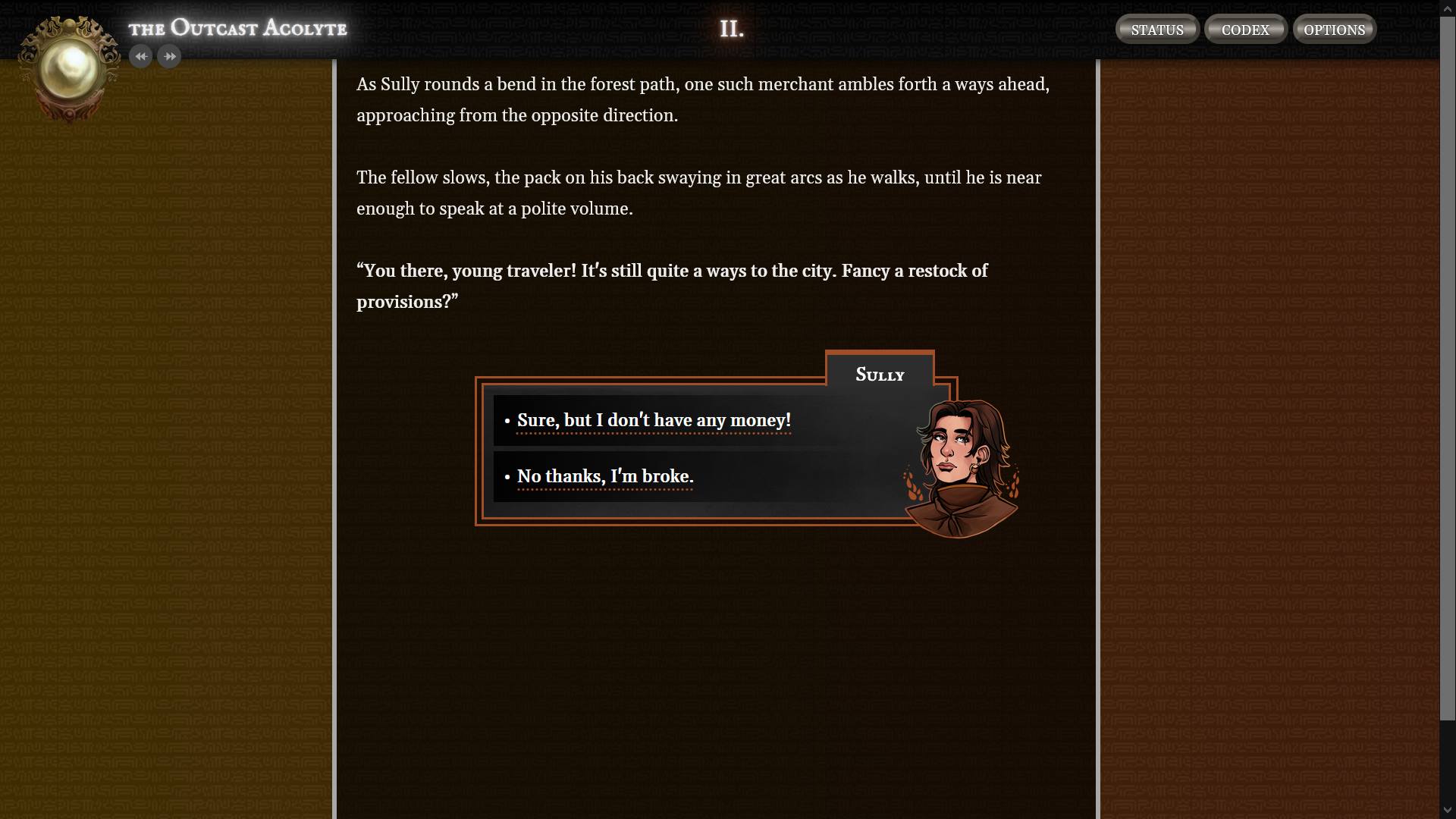 Their UI is dominated by a warm, orange color scheme, and their player icon is a convex mirror.

Sully's mirror is based on medieval manuscript illumination and marginalia, the convex mirror in the Arnolfini Wedding Portrait, and the hellmouth in the Queen Mary Apocalypse. 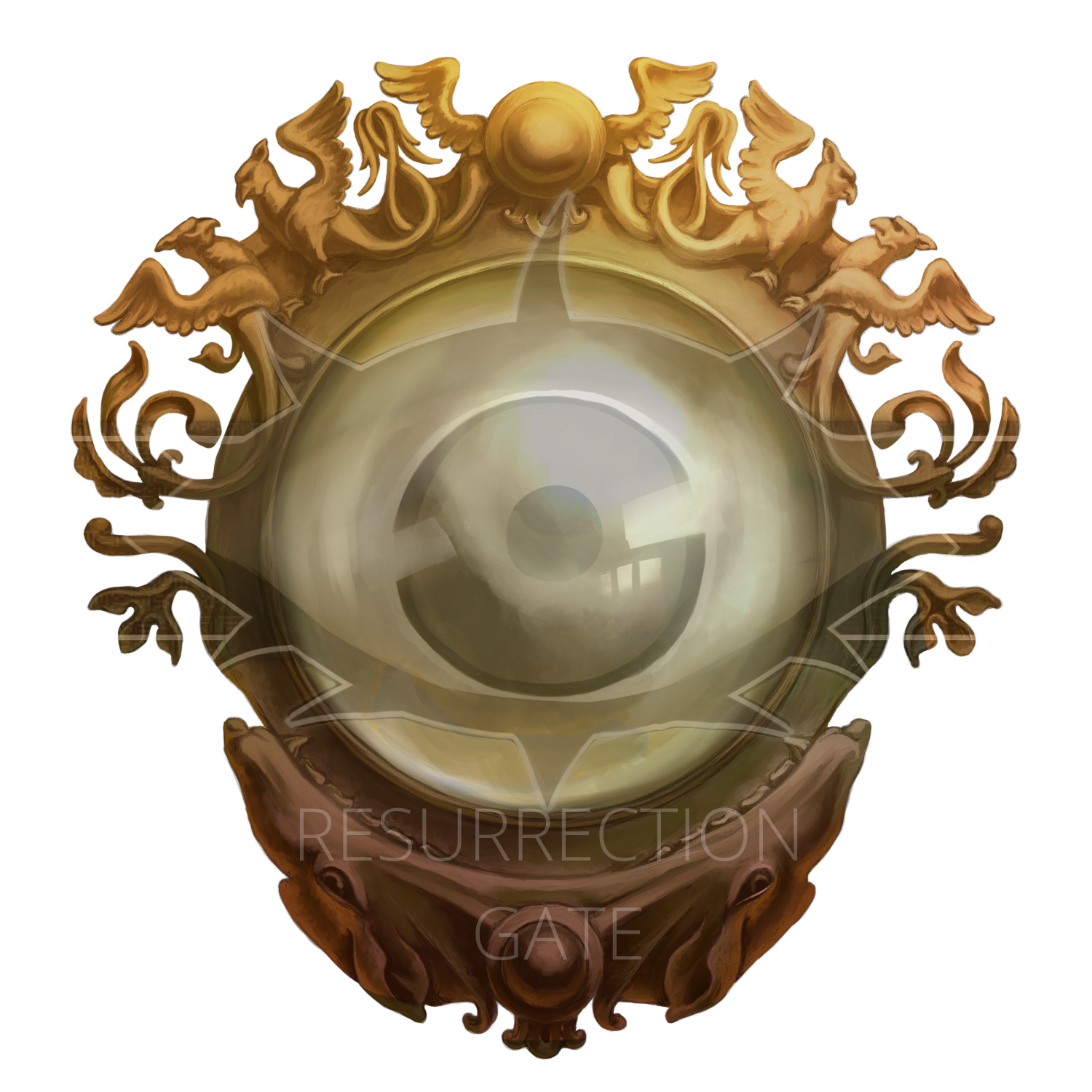 A man whose murder did not take

Determined to thrive in spite of his recent murder, he is a lich who has chosen to resurrect among the living. In life, he was an unfortunate servant of a callous Marquis, and he bore the proof in plain sight: his face and body were covered in the Marquis' iconography. In death, he rejuvenated himself, wringing the ink from his flesh and conjuring a younger-looking incarnation from his own corpse.

These days, most are obliged to call him “Your Grace.” He is now the temporary steward of the Duchy of Wratun. A severe and stately fellow of advancing age, the Duke is prim, cold, and dignified by all outward appearances. Yet within, he suffers in the wake of a terrible death and a life's worth of unfinished business. He revels in cheating mortality, but it is of extreme importance to him that no one discovers that he — or certain members of his court — are actually undead.

After enduring a lifetime of servitude, he now desperately seeks control. To spite his former master, he believes that he’ll find comfort in rulership, but he is coming to realize that power alone cannot soothe his wounds. 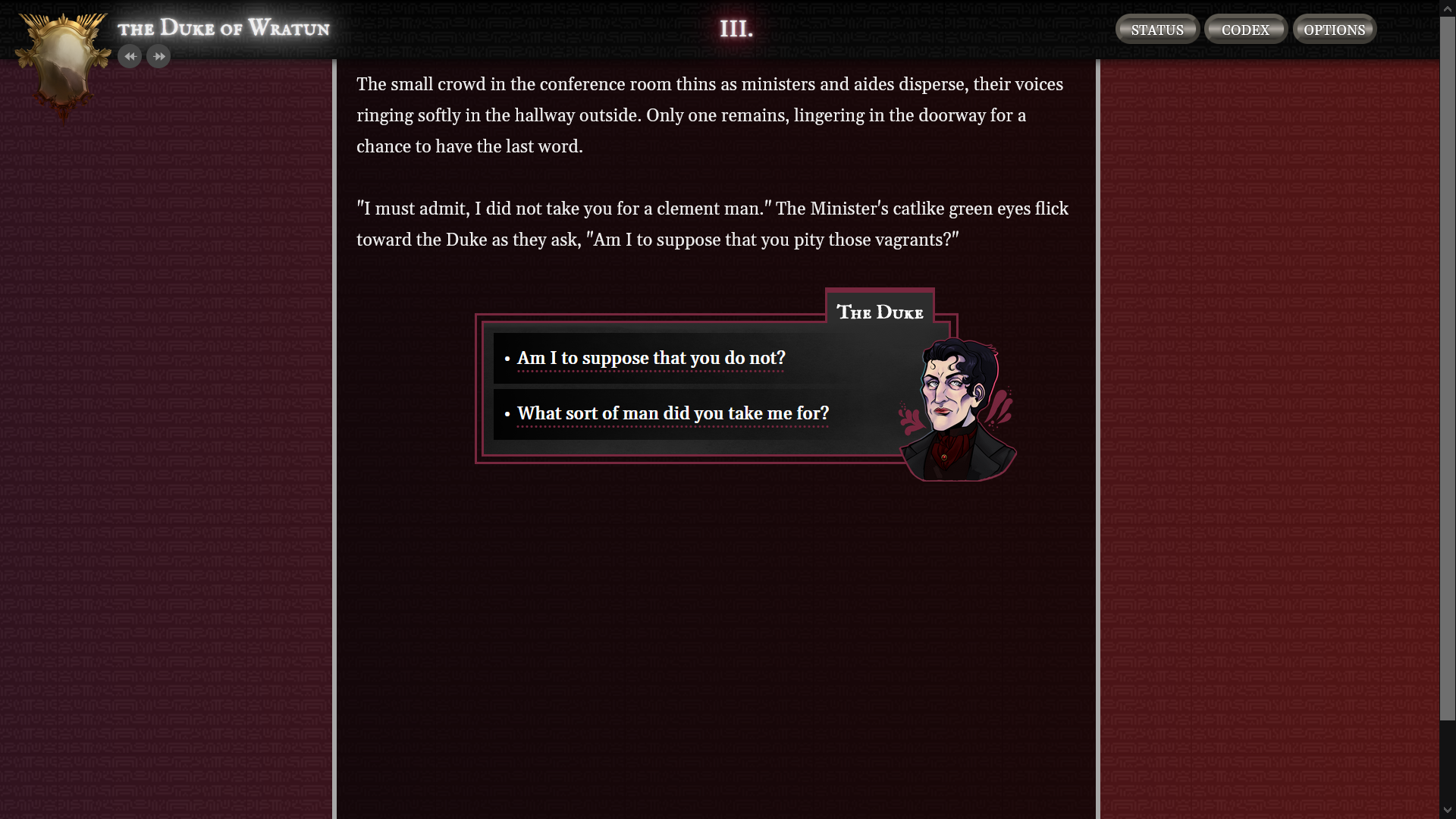 The Duke's UI is a sanguine gradient emphasizing different tones of red. His mirror is ornate and dignified, with an angular, forbidding quality. Its design is based on on antique monstrances, which reinforce the supernatural aspect of his character, and some Italian baroque mirrors.

The glass is cracked, for this is not a man known to have much good luck. 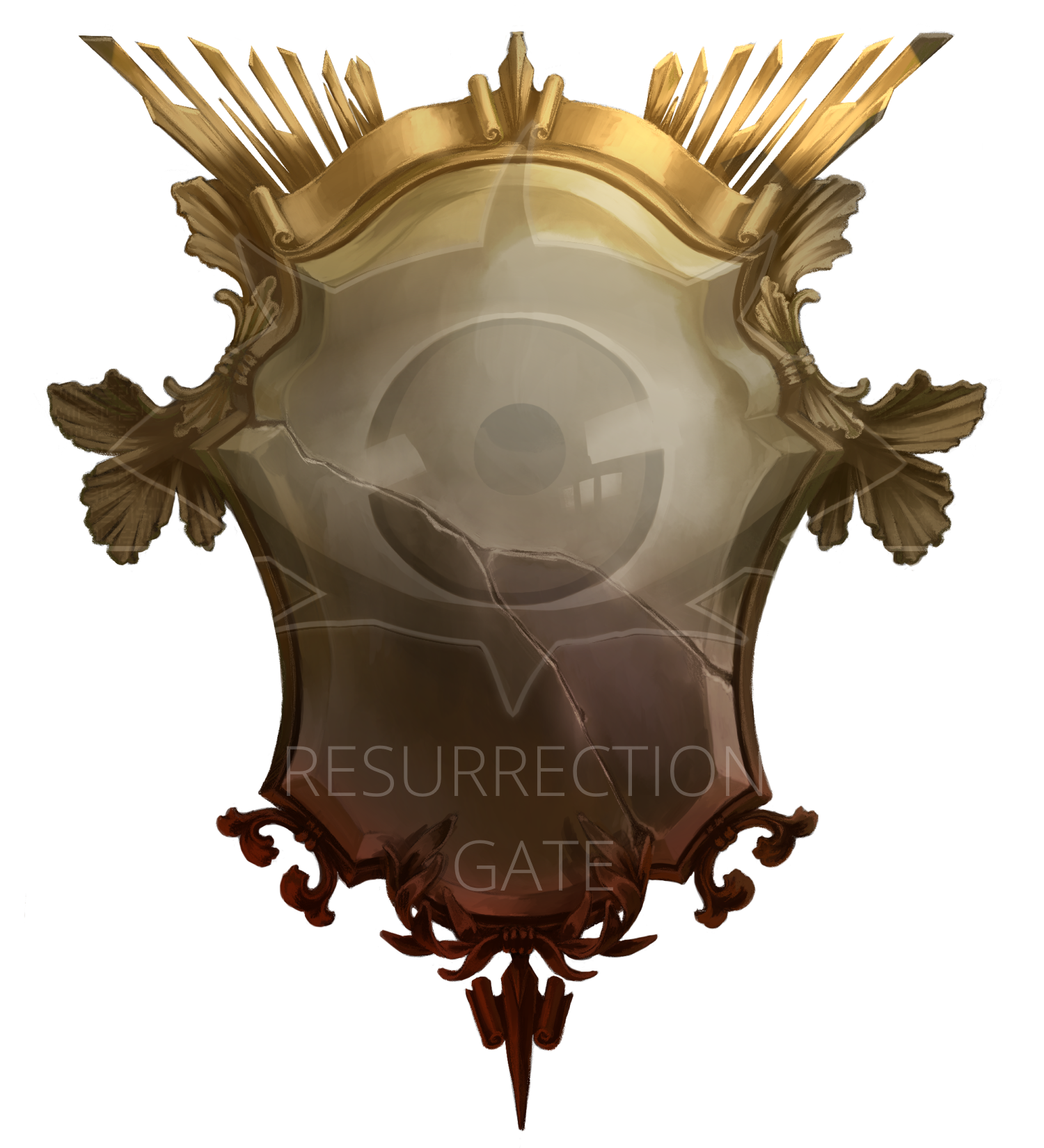 Thanks for reading! (You probably noticed that the Duke's is currently the only portrait that blinks, but I can't resist showing that off. I'm still working on the others.)

The next devlog you can expect will be similar to this one, but instead it'll introduce a few NPCs: Rheya, Besarion, and Nazaret.

Pretty, good looking portraits and description. Keep it up!